As We are waiting for exam and result of AIPMT 2015, we are mentioning Previous year analysis based on Result of 2013 and 2014. We will put up Expected Cut off for AIPMT 2015 as soon as it is displayed in official websites.. Till then

More than one-fourth of the total AIPMT All India 15% medical and dental quota seats have been returned to the states after the third and final round of counselling. According to the Medical Counselling Committee (MCC), which allots All India Quota medical seats across government colleges in the country, a total 858 out of 3,084 seats have been returned to respective the states after AIPMT 2014 Counselling Round 3 . Out of the 858 seats, 682 are from MBBS and 176 from BDS.

Admission to All India 15% undergraduate medical and dental quota seats through AIPMT 2014 counselling concluded on September 5, 2014 with the remaining seats being transferred the states.According to officials, the highest numbers of medical and dental seats have been returned to Maharashtra followed by West Bengal.

Seats Available at Various Round of AIPMT 2014 Counselling:

The AIPMT 2014 counselling process, was conducted in 3 rounds.  AIPMT 2014 Counselling round 1 was conducted for 2360 MBBS and BDS seats in 123 Government Medical and 29 Dental Colleges of India respectively, excluding Andhra Pradesh and Jammu & Kashmir.

A total of 18,115 candidates had qualified for 15% All India Quota Seats for 3,084 MBBS and 297 BDS seats in 123 Government Medical and 29 Dental Colleges of India respectively, excluding Andhra Pradesh and Jammu & Kashmir.

For admission to MBBS seats, the AIPMT 2014 cut off for unreserved category candidates in the third round of Counselling was 5646 while for BDS it was 7283.
The category-wise cut off rank for MBBS in AIPMT 2014 is shown in the graph given be 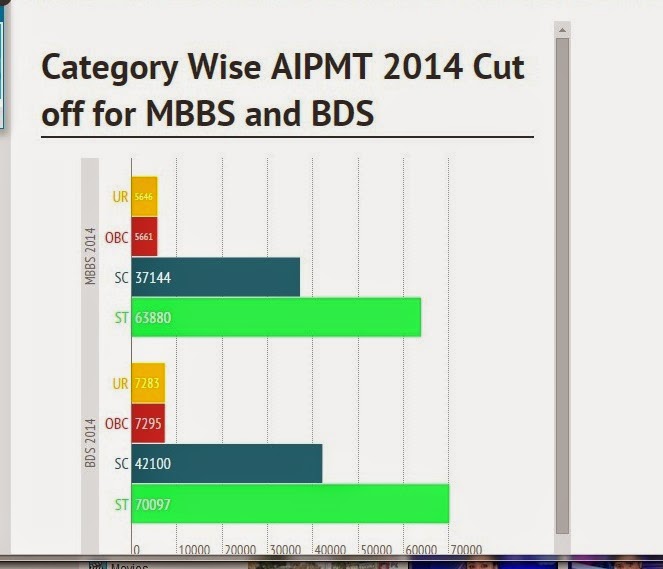 A total of 13 medical and dental seats have been reverted to 4 popular medical institutions after AIPMT 2014 counselling process. Among these are 6 MBBS and 7 BDS seats. The below table shows the reverted  seats of MBBS and BDS.

Toppers Not Participated in AIPMT counselling:    05

Important Highlights of AIPMT 2014 Counseling Round

The round wise important highlights of AIPMT 2014 counselling are mentioned below:

Programs of Vikas Kumar & Psychographic Society,Ranchi that will give wings to your dream

AIPMT 2014 scores will be the basis for admission to 15% of undergraduate Medical and Dental course seats in Government Medical and Dental Colleges across India. This national level undergraduate medical entrance exam is conducted by Central Board of Secondary Education (CBSE). Last year, the all India entrance for medical was conducted in the name of NEET 2013. The Medical Entrance Test has been renamed AIPMT this year.
As per the Medical Council of India information, there are around 381 MBBS Colleges in India. The total number of MBBS seats in these medical colleges are 5 0,078. In addition to this, the Union Cabinet has approved increasing of 15,000 MBBS seats at recognised government medical colleges across the country last year, increasing admission chances for AIPMT 2014 aspirants in different medical colleges of India.

NEET 2013 Cut off for 15% Quota:
In NEET 2013, the cut off marks for general category candidates was 470. Candidates who had scored, 470 or above they could get admission opportunity under 15% quota in Government Medical Collegeacross India. Below is the chart on the Category wise cut off for 15% quota in Government Medical College:

NEET 2013 Cutoff - Category Wise:
NEET 2013 which was held last year as all India Entrance Test for admission to 15 per cent quota in government Medical colleges and also various medical institutes accepting NEET 2013 scores from different states. Candidates from general category who scored 98 or above were qualified for admission through NEET at different medical colleges. For different categories, the minimum qualifying marks varied from 81 for ST-PH to 98 for unreserved Category. In NEET 2013, overall 157214 unreserved category candidates had qualified.

Based on the Central Board of Secondary Education (CBSE) official data, the total number of candidates who registered for NEET 2013 entrance test was 717127. Out of which 658040 candidates had appeared in the test but only 366317 candidates could qualify for admissions.

Cut-off 2013 for some of the top Medical colleges:
Here we bring you cutoff marks for some of the top medical colleges of India based on students’ preference for admission though NEET 2013 counseling.
NEET 2013 Cut off marks for the some of the well known Medical Colleges is given below:
Some of the other Top Medical MBBS College of India - Opening Rank and Closing Rank Based on NEET 2013
Likewise NEET 2013, duration of AIPMT 2014 Exam will be of 3 hours duration. AIPMT 2014 Exam question paper will have 180 Multiple Choice Questions. There will be 45 questions from each section of Physics, Chemistry and Biology (Botany and Zoology). While each correct answer will carry 4 marks, 1 mark will be deducted for a wrong answer.
The result of AIPMT 2014 will be declared on or before June 7, 2014. On the basis of AIPMT 2014 result, CBSE will prepare merit list of the eligible and successful candidates. Accordingly, candidates will be called in AIPMT 2014 counselling for admission to the 15 % of total seats in the Government Medical/Dental Colleges of India excluding Andhra Pradesh and Jammu & Kashmir.

Email ThisBlogThis!Share to TwitterShare to FacebookShare to Pinterest
Labels: Medical