No Special JOSAA Round, but institutes can do it with permission_2016

There seems to be more seat vacant then announced...lets wait for official announcement 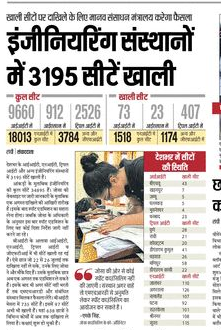 A Report Published by Prabhat Khabar-Ranchi on 29th July

Posted by Career blog by Vikas Kumar, Career Counsellor, Ranchi at 10:51 AM 13 comments: New Delhi: Two important bills that seek to replace ordinances to keep state boards out of the ambit of National Eligibility-cum-Entrance Test (NEET) for the academic year 2016 will be introduced in the Lok Sabha on Tuesday, said Minister of State for Parliamentary Affairs S.S. Ahluwalia.
“The Indian Medical Council (Amendment) Bill, 2016, and The Dentists (Amendment) Bill, 2016  seeking to amend the Indian Medical Council Act of 1956 and the Dentists Act of 1948  to replace the two ordinances will be taken up on Tuesday,” Ahluwalia told reporters. The business advisory committee of the House had fixed four to six hours for discussions on the bills.
“Passing these two bills will be our top priority,” Parliamentary Affairs Minister Ananth Kumar said.
The Centre had, in the wake of reported pressure from some states, in May promulgated the two ordinances to keep the state boards out of the ambit of the pan-India medical and dental entrance examination (NEET) for 2016.
On July 14, the Supreme Court had expressed “doubt” over the validity of the ordinance allowing the states to hold their own entrance examinations for admissions to undergraduate medical courses for the current academic year by passing the NEET.
The apex court refused to stay the ordinance’s operation, as 50 per cent of the states had already conducted their own entrance examinations for admissions to their respective government medical colleges.
However, a bench of Justice Anil R. Dave, Justice Shiva Kirti Singh and Justice Adarsh Kumar Goel said: “Prima facie, we find that the validity of the ordinance is open to doubt.”
The Indian Medical Council (Amendment) Bill, 2016 and the The Dentists (Amendment) Bill, 2016 were slated to be introduced in the Lok Sabha on Monday by Health Minister Jagat Prakash Nadda, but the lower house proceedings were adjourned for the day as a mark of respect to the death of a sitting member.

"The ministry has planned a subvention scheme which will ensure that the interest part on loans is taken care of by it. The details of the scheme are being finalised by the ministry."

By: PTI | New Delhi | Updated: July 15, 2016 1:20 pm
The HRD Ministry is working on a subvention scheme to help IIT students get interest-free loans so that they can pay their fees easily.
Officials in the Prakash Javadekar-led ministry said while the fee for these institutes was hiked recently, the government also wants that students and their parents do not face any hardship.
“The ministry has planned a subvention scheme which will ensure that the interest part on loans is taken care of by it. The details of the scheme are being finalised by the ministry,” an official said.

Under the earlier HRD minister Smriti Irani, the fee was increased from Rs 90,000 to Rs 2 lakh per annum.
However SC, ST, the differently abled and economically backward sections were provided waivers.
Officials said that the scheme will help those, who don’t come under the categories but still may need assistance to cope with increased fee.

When the IIT fee was hiked, it was mentioned that students would be able to get interest-free loans under the ‘Vidyalakshmi’ scheme.
However, according officials, there has been some feedback regarding difficulties prospective students are facing in securing interest free loans and the ministry is trying to ensure that these are addressed.
The fee hike comes into effect from this academic year, when the new batch joins.
Posted by Career blog by Vikas Kumar, Career Counsellor, Ranchi at 8:48 AM 3 comments:

15 July 2016
In a recent declaration, the Directorate of Technical Education (DTE), Maharashtra has decided to scrap the admissions to the engineering courses for students who had not taken the Maharashtra Common Entrance Exam (MHT-CET) 2016 and had got admission on the basis of JEE Main 2016. DTE has informed this to all the students who were allotted seats in Centralised Admission Process (CAP) Round 1 on the basis of their JEE Main 2016 marks.
"It was an error from the CAP's side. We are now awarding seats according to the State Government's directives. Primarily, we will allot seats on the basis of MHT-CET marks. Secondly, we will accommodate only those JEE students who had taken the MHT-CET 2016," said D S Meshram, Joint Director - DTE.
DTE has allotted around 15% seats for admissions in the engineering colleges in Maharashtra through JEE Main score. "Students who secured admission through their JEE Main score and had also taken the MHT-CET test will be given preference in the fourth round of CAP, in the Other than Maharashtra State category (OMS)," said Meshram.
This is not the only problem which engineering aspirants will have to face in Maharashtra, as the All India Council for Technical Education (AICTE) has gone to the Supreme Court seeking a ban on four engineering colleges in Maharashtra. A letter sent from the AICTE to the Directorate of Technical Education (DTE) has named Padmabhushan Vasantdada Patil Pratishthans College, Sion, Anjuman-I-Islam's Saboo Siddik College, Byculla, Thadomal Shahani College, Bandra and Dr. J J Magdum College, Kolhapur.
The future of those students who have taken admissions to the above-mentioned engineering colleges will now depend on the decision of the Supreme Court.
Posted by Career blog by Vikas Kumar, Career Counsellor, Ranchi at 2:31 AM 1 comment:

Email ThisBlogThis!Share to TwitterShare to FacebookShare to Pinterest
Labels: Engineering

Posted by Career blog by Vikas Kumar, Career Counsellor, Ranchi at 5:30 AM 1 comment:

India Infoline News Service | Mumbai | July 13, 2016 18:19 IST
The growth during this period was predominantly led by sectors such as Telecom, IT-Software, ITES, Healthcare and Insurance. Other sectors such as BFSI and Pharma were stagnant in current index of June’16 as compared to June’15. 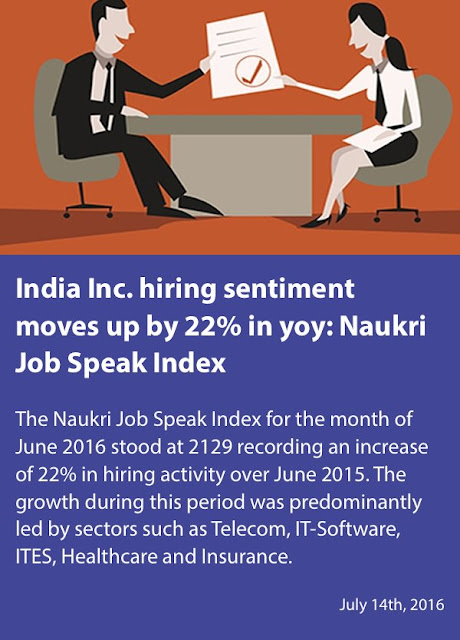 The Naukri Job Speak Index for the month of June 2016 stood at 2129 recording an increase of 22% in hiring activity over June 2015. The growth during this period was predominantly led by sectors such as Telecom, IT-Software, ITES, Healthcare and Insurance. Other sectors such as BFSI and Pharma were stagnant in current index of June’16 as compared to June’15. Increase in demand for professionals working in IT-Software started from January’16 onwards and for the month of June’16, they saw their jobs go up by 19% over same period last year. Similar trends were seen for Sales and Business Development professionals on Y-o-Y basis, they saw an 11% increase in new jobs. Demand for professionals in Marketing and Advertising industry witnessed an impressive 34% growth in new jobs creation in the month of June’16 over June’15. Among the metros, Delhi/NCR leads with a 46% growth followed by Chennai and Hyderabad at 43% and 36% respectively. Mumbai, Bangalore and Pune also report growth of 24%, 18% and 13% respectively in June’16 over June’15. V. Suresh, Chief Sales Officer, Naukri.com said, “The job market continues to sustain the momentum gained over the past few months and is moving further north with an impressive 22% Y-o-Y growth in June’16. Though this growth is predominantly driven by sectors viz., IT, Telecom and Healthcare we can expect the other sectors to pick up in the next few months or so. Looks like good times ahead for jobseekers.” Industry-wise analysis:  The detailed analysis of core sectors is as follows:
Functional Area analysis: Demand for professionals in IT-Software continues to grow, analysis of other industry professionals are as follows:
City-wise analysis: All metro cities witnessed growth in jobs this year in June compared to the same time period last year.
Posted by Career blog by Vikas Kumar, Career Counsellor, Ranchi at 12:22 AM No comments:

First round allotment result of JEE channel is given below.

You must download your offer letter from the Application portal. The offer expires at 4 PM of 12 July 2016, Tuesday.

Candidates who have been offered through IIT-JEE Channel may note that unless you pay fee to the respective IISER your candidature would be cancelled on the offer expiry date and you will not be considered for FLOAT option. No request later would be entertained. 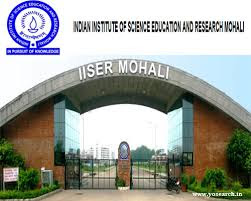 There may be a second round of allotment for JEE channel candidates depending on the vacancies at various IISERs after the registration period of the first round.